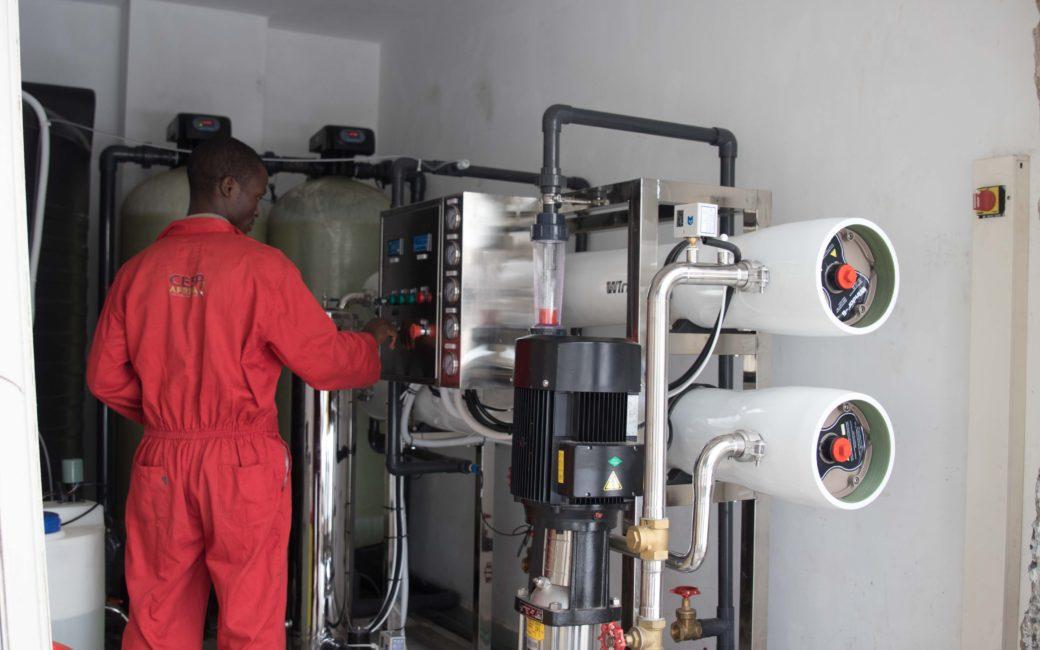 The client has an apartment complex located in Westlands area. They receive water from Nairobi water, but most of their water is from a borehole.

Their water contained raised amounts of fluoride and suspended solids, as well as discoloration.

The system has a production capacity of 4000Liters per hour.

The system includes: a sand, carbon filter and cartridge filters.

The raw water is pumped through the filters using a feed pump.

The system has an antiscalant dosing tank to protect the reverse osmosis membrane from scaling.

The system is controlled using a control panel, which also displays details on the system’s production.

Before actual installation period, water from the apartment is taken for analysis. Results from the analysis informed the treatment of the raw water.

Some pipes were laid and the raw water tank was delivered before the other components were delivered. Power cables were also laid to provide the system with electricity.

During the four-day period the sand and carbon filters were filled and backwashed to remove any impurities that may have been present in the media.

Plumbing was fitted to connect the components of the whole system.

Raw water passes through the following stages before the final product is produced:

The water being treated by this reverse osmosis plant is mainly borehole water. The raw water comes directly from the borehole into a 5000L portable tank that is within the RO room. There is a high-level float switch within the raw water tank that serves to facilitate automatic operation of the borehole pump such that the water does not overflow from the tank upon filling up.

Before raw water passes through the reverse osmosis machine, it passes through an assembly of filters comprising a sand filter, carbon filter and cartridge filters. The work of the sand filter is to remove suspended solid particles from the raw water. The carbon filter on the other hand removes smell and taste. Both vessels (sand filter vessel and carbon filter vessel) have got automatic control valves. The cartridge filters assembly is meant to remove any finer suspended solid particles present in the raw water which were not removed by the sand filter.

The most important parameters on the reverse osmosis skids are the RO inlet pressure, RO outlet pressure and the permeate flowrate. These are indicated on gauges and flowmeters provided on the skid. Permeate flowrate (in cubic meters per hour or simply CMH) dictates the yield or production of the plant.

The concentrate is the unwanted residue and it passes through a separate pipeline to the drainage system of the facility. The permeate on the other hand goes into an underground reservoir via a one-inch pipe. The permeate is the purified water or the wanted product. Within the underground storage tank, there is a high-level float switch whose function is to automatically switch off the RO machine upon filling up of the tank.

After we installed the system we trained the care taker on how to monitor and take care of the system. We also provided a one year warranty on the system.